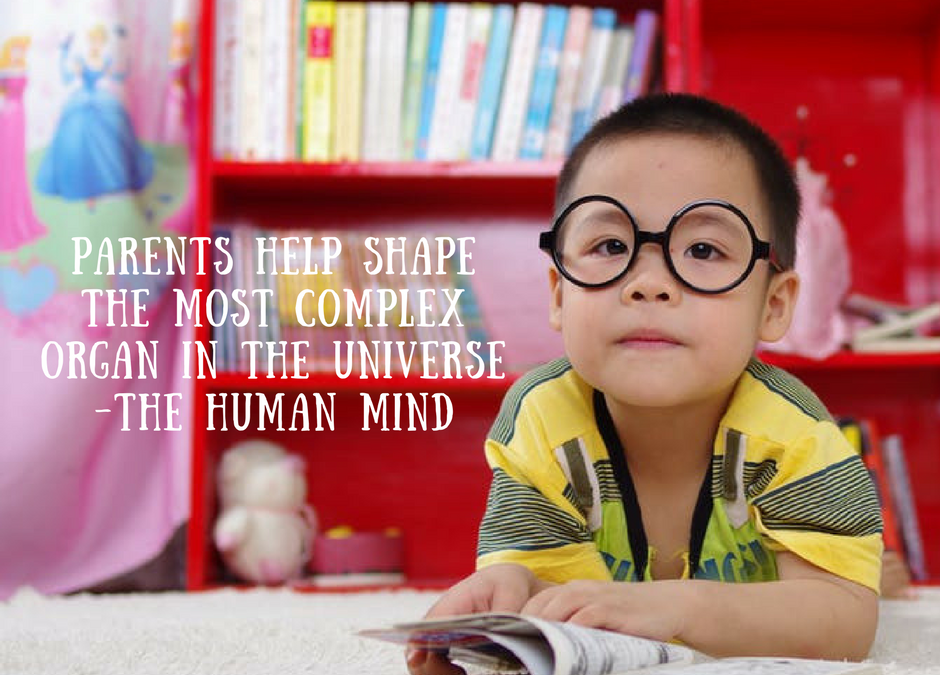 Parents help shape the most complex organ in the universe – the human mind.

TRIUNE BRAIN (Paul MacLean, l978) -the human brain is a hierarchy of three brains in one; each has a different structure, function and chemistry. Though the human brain has evolved in size and complexity, it still contains the basic components and functions of its’ reptilian and mammalian past.  Thus we all carry in our brains, the legacy of millions of years of evolution.

The Brain Stem  (the reptilian brain) is at the base of the skull and is often called the ‘primitive brain’.  It represents the first stage of evolution and is shared by all vertebrates. It controls primitive sexual, territorial and survival instincts. It also regulates behaviors like sleeping, breathing, heart rate, etc..  It receives information that activates the Fight, Flight or Freeze response; sensing and preparing for danger before we are consciously aware of any potential threats. Our senses are always on alert . . . scanning the environment . . . our very survival depends upon it!

The Limbic System  (the paleo-mammalian brain – or ‘emotional brain’) is wrapped around the reptilian brain. It developed as evolution proceeded to provide mammals with enhanced survival skills and allowed for the ability to interact with the environment. This second phase of brain evolution gave humans the ability to experience and express emotions. This region of the brain manages many functions including storing and retrieving social/emotional and attachment experiences and memories. Our meaningful attachment experiences are encoded through the senses and stored as implicit memory. Also included in the Limbic System is the hippocampus which categorizes and stores stimuli in short term memory. The limbic system is the seat of all primary attachment or relationship bonds . . . it is what makes us uniquely human.

The Cerebral Cortex (neo-mammalian brain) is the third layer of the brain to evolve.  It is the most highly developed in humans, and is five times larger than the brain stem and limbic system combined. The prefrontal cortex allows for planning, creative thinking, the capacity to observe ‘internal emotional states’ (self-awareness), and to have choice regarding those ‘internal subjective states’. This part of the brain is also referred to as our ‘thinking brain’ as it governs the production of language, decision making and information processing, and is believed to regulate the ‘higher’ emotions of empathy, compassion, and love (Pearce l992). It helps us watch, guide, supervise, direct and focus our behavior . . . and it allows us to learn from our mistakes.

Reticular Activating System (RAS) – begins in the brain stem and is attached to the Cerebral Cortex. It serves as a switching device between our brain stem (Primitive brain), Limbic System and our Cerebral Cortex (Executive brain). When we are threatened, stressed or emotionally aroused, the RAS enables the limbic system to take over and facilitate automatic, instinctual responses (Fight, Flight or Freeze). When we are relaxed again, the Cerebral Cortex regains executive functioning, allowing logic and reasoning to return… but not until we FEEL safe and our body feels calm.

The human brain is similar to a complex ecosystem – it remains wonderfully plastic and malleable throughout adulthood. It has tremendous ability to compensate and rewire with practice. Merzenich at University of Ca. in San Francisco – implanted electrodes in the brains of six squirrel monkeys. Using computer imaging, he created a map of neurons that fired when the monkeys manipulated objects with their hands. He put a single food pellet outside the cage in a wide cup. The monkeys would reach through the bars and work their fingers into the cups until they grasped the pellet. After several days, the monkeys were extremely skilled with their fingers. After the first day, the computer images showed that the area of the brain that became active when the monkeys moved their fingers had increased in size. New neuronal pathways are created through practice and repetition.

Neural Darwinism – use it or lose it!  The brain needs to be plastic and change with the new demands placed upon it. We learn and unlearn throughout our entire lifespan. Neurons that fire together – wire together. From practicing our tennis serve to learning a new language – the more we encourage the formation of certain connections, the more fixed these neural circuits in the brain become.

There are critical periods in brain development or ‘windows of opportunity’ – when the connections for a function, like language or fine motor skills, are extremely receptive to input. Once that window is closed, neural connections are pruned down to the most efficient, according to how much they are used. Again, use it or lose it.

At 3 months –  areas that manage language, hearing and vision are the most active and receptive

at 6 months –  areas that manage thinking, reasoning, and expressive language are the most active and receptive

The Impact of Trauma and Neglect

Children with a history of neglect and abuse are often deprived of fundamental experiences necessary to nurture the development of their Executive Functioning Cerebral Cortex and the Limbic System (the Emotional Brain). Their sensory-motor and emotional development can remain somewhat stuck in the lower brain center as their primary focus is survival. Children can be stuck in a chronic state of distress and hyper-arousal with little ability to self-soothe, calm down or find pleasure. Fear wires into the brain quickly as our very survival depends upon us learning who poses a threat and where danger exists. Children whose central nervous system is stuck in chronic distress and hyper-arousal have little ability to calm or regulate their internal distress. Their senses often are hyper-vigilant to stress responses and they are easily triggered into states of prolonged emotional reactivity. They often have emotional and behavioral issues including hyper-activity, impulsivity, aggression, distractibility, sleep issues, learning challenges, defiance, anxiety, etc.

Affect Regulation can be severely impaired. A reliable, responsive parent or caregiver provides a balance of stimulation (‘up’ regulation into a pleasure state) and soothing responses (‘down’ regulation into a calm state). The infant or small child has little to no ability to modulate their own level of arousal or meet their own ‘need states’. Attachment impaired children are often unable to regulate affect as their ‘biological system’ was exposed to overwhelming trauma, neglect and stress during critical stages in their neurological development. Children are biological beings. They live inside the feelings and emotions they experience from their bodies. If most of what they have experienced through their senses has been chaotic, overwhelming and disorienting . . . they may have little ability to manage the amount of toxic stress their bodies have absorbed.

Sensory Integration Problems – Early trauma and/or neglect bombards a child’s system with overwhelming and toxic stress. Their immature nervous system is easily triggered into distress or hyper-arousal (increased heart rate and respiratory rate). The child is often unable to effectively process and filter information they receive through their senses. The child may appear inattentive, unfocused, and/or hyperactive. Sensory integration therapy will assist the brain in strengthening the neuronal pathways needed to process and filter sensory input without becoming hyper-aroused or overwhelmed.

Speech and Language Problems – the parts of the brain that are responsible for language processing and development are the most receptive to input and stimulation beginning at three months of age. This is a critical time, as the infant is most receptive to incoming stimuli – severe deprivation and lack of language input will result in the child having a very weak foundation in expressive language. When a baby hears a word, over and over, neurons from his ear stimulate the formation of neural pathway connections in his brain’s auditory cortex. By a child’s first birthday, this ‘auditory map’ for language is complete. Children are functionally deaf to sounds absent from their native tongue (and their babbling – has taken on the sounds of their own language). Research has shown that Swedish, Japanese, and English babies – all have different ‘auditory maps’. For parents adopting children internationally, it’s important to be sensitive to the disruption of the native language auditory map.

A Limbic Bond –  Children who have a ‘limbic bond’ – a strong emotional attachment to their ‘primary attachment caregiver’ are less likely to struggle with teenage drug use, violence/aggression, promiscuity, and suicide (Resnick l997). Children with attachment impairments are usually physiologically stressed as early biological needs were not met –  the body does not relax into homeostasis but is in a constant state of  dysregulated stress; the child’s limbic system and RAS is triggering states of Fight, Flight or Freeze. Since the child is predominately stuck in a stress response – his/her higher brain functions (or executive functioning) are under-utilized. An important aspect of treatment – is to attend to the physiological issues and strengthen the child’s ability return to a state of calm after a distressing event. Eventually learning to manage his/her internal distress and learn effective ways to relax and self-sooth which will eventually allow for the accessing of Executive Functioning (decision making, planning, organizing). These skills can only be learned and mastered through practice and repetition. Practice must be experiential, as all of the senses must be activated to assist in the creation of new neuronal pathways. Practice the ‘desired behavior’, role play, play therapy, yoga, Taekwondo, music, dance, art . . . all will help your child strengthen  self-regulation and Executive Functioning!

Allison Davis Maxon, M.S., LMFT is a nationally recognized expert in the fields of child welfare and children’s mental health specializing in Attachment, Developmental Trauma and Permanency/Adoption. She is the Executive Director of the National Center on Adoption and Permanency and was the foster care consultant for the Paramount Pictures movie Instant Family. Allison was honored in 2017 with the Congressional Coalition on Adoption Institute ‘Angels in Adoption’ award and is the co-author of Seven Core Issues in Adoption and Permanency: A Guide to Promoting Understanding and Healing in Adoption, Foster Care, Kinship Families and Third Party Reproduction, Jessica Kingsley Publishers 2019.